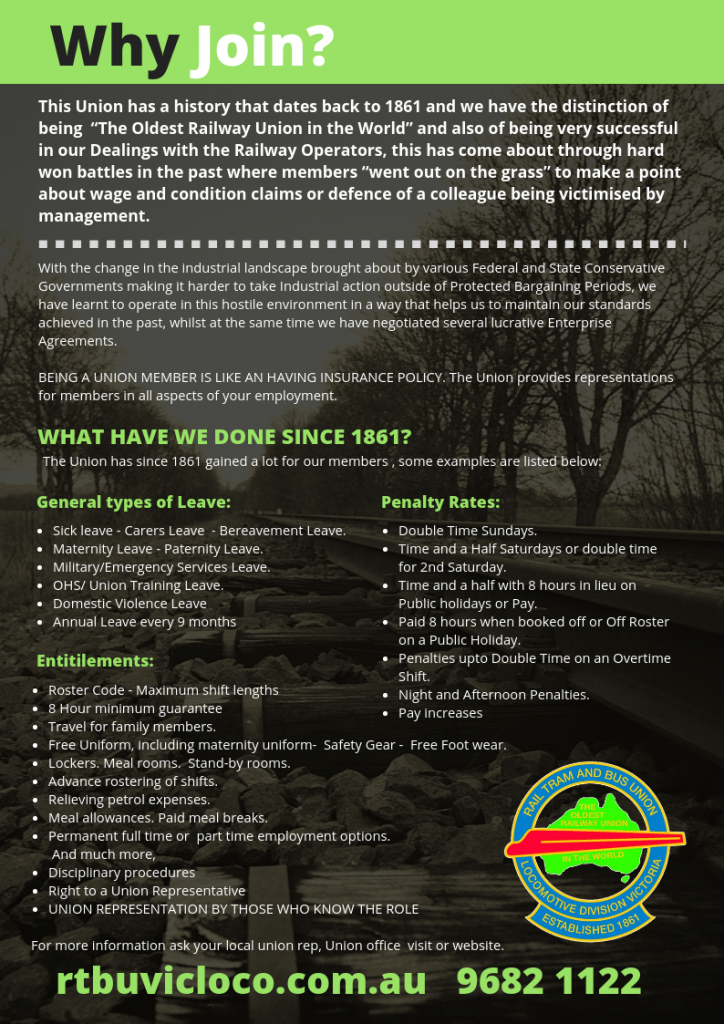 The below scenarios are just some of the scenarios that our delegates have been involved with.

A trainee driver fails an assessment, member calls the Union and Union negotiates a remedial and to resit assessment/s.

Member is involved in a SPAD and is required to be represented/ supported at meetings with Management.

An investigation by Management has found large number of days taken as sick leave- Management seek a meeting with member to discuss – warning letter placed on file. Union contacted to dispute.

Complete, save, and either email, fax or deliver to reception for a referral to one of the specified Lawyers.

We also have a Family Law Firm and a Criminal Law Firm that provide our members with a free initial consultation and discounts on future consultations.

(7) A member paying his/her subscriptions through periodic deductions [Direct Debits] shall be financial from the date of the first such deduction provided that he/she owes no prior arrears.

(2) A member, while unfinancial, shall not be eligible for any of the rights and privileges of membership
including the right to vote in any election or ballot of members or, to attend or vote at any meeting within
the Union or to nominate for or hold any Office within the Union.

(3) Notwithstanding the provisions of Sub-Rule 13(1), a member who is unfinancial shall not become financial until he/she pays all arrears due.

(1) A member may resign from membership of the Union by written notice addressed and delivered to the
Secretary of his/her Branch.

(2) A notice of resignation from membership of the Union takes effect:-

a. where the member ceases to be eligible to become a member of the Union:-

i. on the day on which the notice is received by the Union; or

ii. on the day specified in the notice, which is a day not earlier than the day when the member
ceases to be eligible to become a member;
whichever is later; or

i. at the end of two weeks; or

ii. on the day specified in the notice;

(3) Any subscriptions, fees, fines and levies owing but not paid by a former member of the Union in relation to a period before the member’s resignation took effect, may be sued for and recovered in the name of the Union in a Court of competent jurisdiction, as a debt due to the Union.

(4) A notice delivered to the Branch Secretary shall be deemed to have been received by the Union when it was delivered.

(5) A notice of resignation that has been received by the Union is not  invalid because it was not addressed and delivered to the Branch Secretary.

(6) A resignation from membership of the Union is valid even if it is not effected in accordance with this Rule, if the member is informed in writing by or on behalf of the Union that the resignation has been accepted.

(7) If a financial member retires from employment permanently or changes employment to a position not covered under these rules by the union, the member shall be entitled to transfer to the status of Health Fund Member.